x
Skip to the beginning of the images gallery

David Curtis is a member of the Royal Society of Marine Artists and the Royal Institute of Oil Painters. He is one of the UK’s most successful and best known artists. David won first prize in the Singer and Friedlander/Sunday Times Watercolour Competition in 1992, and has won many other awards for his spectacular art. Consequently, his paintings have a strong visual presence and enable the spectator to embark on an exciting visual journey.

Essentially a plein air and figurative painter, working in both oil and watercolours, he is the author of numerous books and has work in collections all over the world.

David is the author of ‘A Light Touch, the Landscape in Oils’ and ‘The Landscape in Watercolour - A Personal View’ both published by David & Charles. A third book and a fifth film, both entitled “Light and Mood in Watercolour” were published by Crysallis Books and APV Films respectively in 2005. A fourth book,”- Capture the Moment in Oils” was released in 2007 with a film of the same title by APV Films. A sixth book and an eighth film were released in 2013, covering aspects of painting on location.

“The Rosemary brand name is now so synonymous with visual artists and creative craftspeople worldwide for brushes of sustained durability, excellent handling properties and fine point and shape retention under arduous use in both studio settings and En Plein Air conditions. I do prefer the control of short flat(bright) brushes,bristle, long handle, more or less throughout my work, with just the use of a fine rigger for detailed passages. Again, the durability of this range under heavy use remains impressive, with good sharp edge retention."

This set contains 6 brushes (all on Long Handles):

All measurements shown in mm.

Related Products
Hide
Compare up to 5 Products
Compare
Remove All
You have no items to compare.
Top 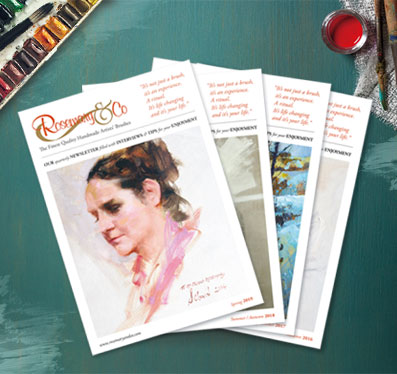 Join the Rosemary & Co E-newsletter and keep up to date with all that’s going on!

You’ll be the first to get all our latest news and offers straight to your inbox.

We will not bombard you with emails, just keep you in the loop from time to time when we bring out new ranges, announce workshops and send you our quarterly newsletter.